(Featured in the LA Weekly)

To say that pit bulls are tough dogs is an understatement.

Consider the plight of Hercules. He was discovered by a pair of canine rescue volunteers in Gardena on May 3. Seriously beat down and stumbling across lanes like a drunk after last call, he had a broken neck.

Rosen believes the dog had been "brutally" beaten and then thrown into traffic that day. "He was immediately rushed to an animal emergency center" for X-rays, IVs and critical care, Rosen said.

Hercules, about 2 years old and weighing 59 pounds, ended up in the hands of Dr. Stephen M. Hanson, a neurosurgeon at the Veterinary Neurology Center in Tustin.

Read the full story and watch his video here.

UPDATE: Hercules recovered and found his forever home! He is living happily ever after thanks to everyone who contributed to his life. xoxo

Can you foster me? 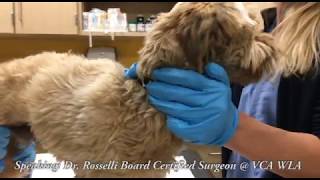 Oliver Is Getting His Christmas Miracle!

CAN YOU FOSTER SOFIA?

Become an Angel (to a rescue dog)

Give Us A Chance (please)

Can you foster me?